Storm Doris: Impact on the UK 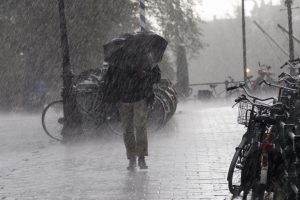 As we move into springtime, we can now look back on what was a tumultuous end to the winter here in the UK. Storm Doris wreaked havoc to thousands across the country in February, causing widespread damage and disruption that many simply were not prepared for.

In this article we’re taking a look at the toll Storm Doris has taken on the UK, from the impact on the population to the major disruption caused to services, infrastructure and more.

Major windstorms like those seen during Storm Doris can take the country over in just a matter of hours. Doris moved in from the west, early on the morning of the 23rd February and swept across the UK over the course of the day.

These winds were a destructive force which caused major disruption to travel by road, sea and by air. Strong winds were responsible for the majority of structural damage and destruction experienced across the country. Gusts were strong enough to rip apart manmade structures such as buildings and piers, as well as tearing down trees and blowing over heavy lorries in transit.

Ferocious winds weren’t the only thing that Doris brought to the table. Heavy rainfall was a persistent and lingering threat to many regions, with flash flooding a common sight which many were unprepared to face.

Cars were submerged and the cleanup process was hampered due to flooding, and areas of Cumbria and Lancashire saw concentrated periods of rainfall over the days immediately following the storm.

Flash flooding is a common consequence of storms such as Doris. Once the initial impact of the storm has subsided, floods often act as a ‘second wave’, with rainfall continuing for a number of days after the winds have died down.

The lack of preparation or suitable flood defenses in high-risk areas often leads to more disruption and damage than necessary, and can lead to consequences of the storm being felt well after the storm itself has passed.

The winds and rain left many without power, caused major delays to rail networks and brought motorways to a grinding halt. Rainfall and plummeting temperatures left dangerous icy patches across the UK, further affecting traffic and manoeuvrability.

With extreme storms like these, it takes great effort for things to return to normal. Structural damage, such as that seen on many rooftops of homes, shops, supermarkets and more, are usually the most impactful consequences for the general public.

Most injuries were caused by this kind of structural damage. A notable example from Storm Doris included a collapsed sports hall roof in Milton Keynes which injured two nine year old girls.

Fatalities, while not widespread, did unfortunately occur as a direct impact from the powerful winds. Three people lost their lives during Storm Doris. A 29 year old woman was killed after being struck on the head by debris blown from a building in Wolverhampton. A 50 year old lorry driver died after his lorry crashed into a lamppost, and a man in his 80s was killed when his car was crushed by an uprooted tree.

After Storm Doris, the country was able to get back on its feet relatively quickly. This isn’t always the case, however.

Every storm or extreme weather event is a learning  experience. For older structures, this might mean demolition instead of rebuilding. This is true of Colwyn bay Pier in Wales, which will only see part restoration – rebuilding the pier in shortened form with more modern materials and techniques to prevent further collapse.

From architecture to flood defense, the country can expect more instances of dangerous storms such as Doris, and will benefit greatly from an increased focus on preparation in the future. Analysing past storms and preparing for floods and damage in the future will ideally lead to reduced impact and a smooth cleanup process for all.

Wildon UK can help you get things back to normal after experiencing a flood. We provide reliable pumping equipment to remove excess flood water and are experienced drainage contractors who can help to make sure your home suffers minimal disruption during periods of heavy rainfall or flash flooding. To find out more about all of our services, simply get in touch with us today.