` What Happens to Sewage Water During a Flood? | Wildon (UK) LTD

Home / What Happens to Sewage Water During a Flood?

What Happens to Sewage Water During a Flood? 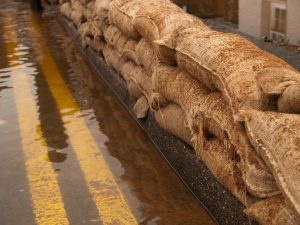 Sewers are meant to remove rainwater as well as sewage from your property, but they can only handle so much water. Excessive amounts of rainwater entering sewers can cause sewer flooding, which becomes quite severe in extreme weather events such as floods. No matter how hard drainage companies work to maintain the sewage systems, if a crisis such as a flood occurs there is little they can do to prevent sewers from overflowing.

In November 2019, Sheffield and the surrounding regions received torrential rainfall that resulted in severe flooding. Hundreds of people were stranded in a shopping centre, and people were cut off from their destinations all over the city due to flooded roads. In a flood this immense, most drainage systems would not be able to cope with the amount of water. The sewer system in Sheffield was built over 100 years ago, and floods have become worse and more regular since then, so they were especially unprepared for such extensive flooding. It was reported that about 5 hours after the flood began, raw sewage was appearing in the floodwater.

Why do sewers overflow in a flood?

The amount of concrete and man-made surfaces in urban environments these days makes floods more intense. This is because the water cannot soak into the earth, so it flows straight into the drains. Traditional sewer systems such as those in Sheffield are not designed to effectively control this much water. They operate by sending the sewage water from homes and businesses into the sewer system, where it gets mixed with rainwater, and ends up in the treatment works. The large amount of water produced in a flood is too much of a burden on the wastewater treatment works and the network of pipes in the drainage system. Therefore the sewer fills with too much water, and it overflows out of places like manholes and drains.

Who is responsible for a flooded sewer?

It is your responsibility to look after the drains on your property, so you will have to contact a drainage company to fix any flooded sewers at home. Usually, a drainage company needs to pay you for any damages if sewage from public sewers floods your private property, but you will not receive any payment if it is due to a flood.

Drainage companies are required to fix any problems that occur within public sewers, and the Environment Agency is responsible for large-scale problems such as when a river bursts its banks. If a road is flooded then the best idea is to contact your local authority as it will either be their responsibility to fix the problem, or they can contact the landowner.

With over 20 years’ experience working in the industry, Wildon UK’s team of engineers are all highly trained to deal with domestic, commercial, industrial or agricultural issues across all spectrums, including: drainage, sewage treatment, sewage pumps, septic tanks and sewage pumping stations.

Catering to customers in Stoke-on-Trent, Staffordshire, and across the rest of the UK, we offer a 24-hour emergency call-out for extreme events such as floods. If you would like to learn more about our services, or what to do in a flood, don’t hesitate to get in touch today.